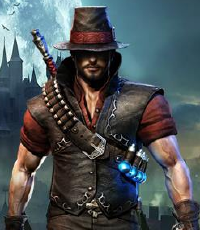 Victor Vran is the main character in the game Victor Vran.

At the beginning of the game, Victor is travelling to the city of Zagoravia, destroyed and invaded by hordes of demons and undeads, in search of his friend Adrian, a fellow hunter, and Victor's best friend, the only one who knows his past. Despite being a member of Hunters Order, devoted to purge the world from demons and undead beings, Victor is not going to Zagoravia to answer the queen's call for help, as the city is overrunned by demons and many hunters had perished trying to oppose them, a disaster whose proportions are unprecedented.

At first, Victor believed Adrian died in the attempt to free Zagoravia from the demons, but after he received a message from him, inviting him to the city, he felt compelled to search for him

Victor's past is shrouded in mystery, as he has unexplained Demon powers; something hunters aren’t supposed to have.

Adrian, Victor's best friend and fellow hunter, is the only person who knows of Victor's powers and how he got them. While searching for Adrian, who has gone missing, Victor will muse on the current situation of Zagoravia and the kind of life a hunter lives; commenting on how difficult it can be, not only because of the danger that comes with fighting, but also for the temptations of the demons.

"Beware that, when fighting monsters, you yourself do not become a monster...
For when you gaze long into the abyss. The abyss gazes also into you."

He'll also state that he have never seen a demonic invasion of such proportions, with so many dead hunters, skilled warriors that no ordinary demon would be able to kill. As he comments during the exploration of the Royal Crypt, in search of his friend Adrian, what strikes him most, is how no hunter escaped, or even tried.

"Killed off one by one. Something is stalking these halls.
Why didn't the hunters retreat and regroup?
What was keeping them in this cursed city?
The pieces are forming a disturbing pattern."

Victor suspects that someone very powerful has made Zagoravia a bait to lure as many hunters as possible, in order to destroy them with any means: temptation and transformation for some, death for those who resist. To Victor's dismay, Adrian will be one of the fallen, having been turned into a vampire. Adrian will try to persuade Victor to join him and enjoy the new power that comes from undeath. Victor is forced to kill the vampire who once was like a brother to him, as he sadly remarks after the battle.

"We always knew this could happen, old friend.
That we could become monsters ourselves, that we fall to the darkness.
Rest in peace, brother."

After this tragic event, Victor changes his mind and decides to stay and investigate the demonic invasion, determined to end it.

Later on, Victor speaks with Tzar Borimir, first ruler of Zagoravia and founder of the Hunters Order, in search for answers about stopping the invasion. The spirit of the ancient king immediately recognizes the demonic taint in Victor's blood, and warns him to go away, for the Well of the Worlds would corrupt and tempt him, but Victor has made a choice:

"I've been running away all my life. It is my time to stand and fight.
Let me tell you my story...

Once upon a time, there was a prosperous kingdom. Its citizens enjoyed a life of wealth, luxury and knowledge.
Until its greedy neighbors joined forces in a vile plot. Three armies surrounded the city and its fall was inevitable.

The young prince, heir to the throne, was willing to do anything end everything to save the kingdom.
In this most desperate hour, an old man whispered to him. "Open yourself to powers beyond this world, for this world has forsaken you. Seal your fate, my prince!".
Those words burned the mind of the prince as fire.

He took the power he was offered and fought like a demon, summoning lightning and fire from the sky.
He turned the tide and the invaders fled in fear.

But great power always comes at a great price. The children starved, for the crops would not grow. His father died of an illness unseen.
For the price of his power was the death and decay of everything around him.

Even tough he was the last of his bloodline, the prince left his kingdom, for if he stayed, his people would suffer and perish.
Now he wanders the world alone, never staying in one place for long, lest his curse catches up with him."