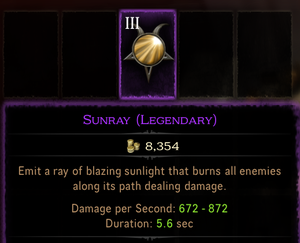 Sunray is a type of demon power.

While channeling sunray, the player can control the firing direction by pointing the mouse cursor. With a controller, this is done by using the left analog stick). The hero can only turn its direction at a very slow rate.

The player can neither move nor use weapon attacks in this state. Other controls (casting demon powers, using consumables, etc.) are still possible.

The player can cancel sunray anytime by dodging or jumping.

When a monster casts sunray, it creates a rotating beam originating at the player's position. The beam damages player on contact.

The caster is still free to move or attack.