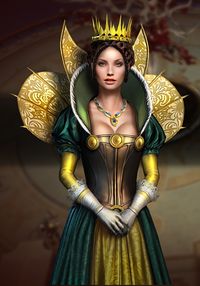 Queen Katarina is the current ruler of Zagoravia.

At the beginning of the story, she has sent a letter to Victor Vran, to request his help in fighitng the demonic hordes plaguing her kingdom. Apparently, only she and few other people survived, now trapped in Castle Zagore.

As soon as Victor speaks to the spirit of Tzar Borimir for the first time, he learns that Queen Katarina has a dark secret, as the Tzar says in riddles.

"Seven stars in the still water,
And seven in the sky;
Seven sins on the King's daughter,
Deep in her soul to lie."

Once Victor asks her what's going on, she reveals the current invasion is the result of a bargain she made in a moment of great weakness. When she was eighteen, she fell ill to the red plague, her hair falling, her skin withered and covered in red pustules.

Despite calling doctors from every part of the kingdom and beyond, no one was able to find a cure, except one: Gabriel. He didn't have a cure, but he knew of a way for her to survive: sealing a pact with the dark forces beyond the Well of the Worlds. She would have had thirteen years of time, before the arrival of the demons to claim her as part of the pact. For his feat, Gabriel was made Lord, before vanishing, he placed a spell on Queen Katarina, making the demons unable to ever find her. She felt safe, her life continued as nothing had happened.

But when the demons came for her, thirteen years later, in the current period of the game, Queen Katarina found out the real price of that bargain and the consequences of that protective ward. Incapable of recognizing her, the demons destroyed everything and killed everyone on their path. As the only way to stop the demons from coming into the world is taking her, the invasion is unstoppable. Queen Katarina tells that calling the hunters to her aid was the only thing she could do, as she doesn't know how to undo the spell placed on her, or seal the Well of the Worlds again.

"This is my story, hunter. I doomed my kingdom. The demon invasion is my folly, the price of my pact with the dark powers.
So strike me down, end the curse, here and now! I am ready to pay for my sins."

But such a pact cannot be undone with the death of the signer:

"The sins of a scared, dying youg girl... Your death will not annul the pact, Katarina. One evil never cancels another.
We all have done things we regret. At least you had the courage to stand and face the consequences."

Queen Katarina's responsibility and guilt for the current situation, is the reason why she remains in Castle Zagore, still hoping to find a way to stop the demons, against the other's survivors opinion, who consider Zagoravia a lost cause.