The Highlander's Outfit is one of the Outfits available in game. When equipped with it, player gains Overdrive by using weapon skills. But player can't gain overdrive otherwise.

It is unlocked by installing DLC: Victor Vran: Highlander's Outfit, which was released on September 24, 2015. A bounty will drop on floor in front of Victor Vran first save loaded after installing the DLC. No other bounties will drop even if starting a new game. That bounty can be obtained entering the code [THERE-CAN-BE-ONLY-ONE] . 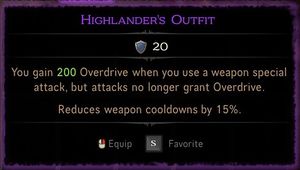 As outfits cannot be deposited in Stash, a player can instead deposit the bounty to effectively pass the Highlander Outfit with another Save Slot.

This outfit is obtainable only in the following ways after having installed the free DLC: